Free Shipping for orders over $99
*some exclusions apply.
Shopping in Portland or Seattle/Renton? Click to Book an Appointment!
Home / ReRack Blog / Road, campsite, and driveway testing the Yakima RoadShower

I’ll admit, when I heard Yakima was incorporating an existing product called the “Road Shower” into their catalog, it wasn’t something I was especially excited about. A big, heavy tank of water on my roof to do what water jugs and wet wipes have done for me for years? It’s not without its quirks, but it turns out, if you can swing the ~$500 and up price tag, it’s actually a pretty convenient piece of equipment.

The RoadShower comes in a big box, but it’s reasonably quick and straightforward to get onto your crossbars. I was able to position this 7 gallon tank on my van by myself. There is a single clamp to attach to the front crossbar and another for the rear, and the on/off elbow to install. Yakima includes 2 accessory locks to install onto one of the clamp assemblies. I installed 2 more on the other clamp assembly to further deter theft, but I’d really like to see these universal brackets redesigned entirely. It’s nice how simple these clamps are, but Yakima has some truly slick universal mounts on other racks that would look better and minimize the exposed bolts, which in my experience can be easily cut even when locked (RIP SkinnyWarrior). I’d prefer to position the tank as far to the edge of the bars as possible, but Yakima says to position the clamp inboard of the tower. Fine. 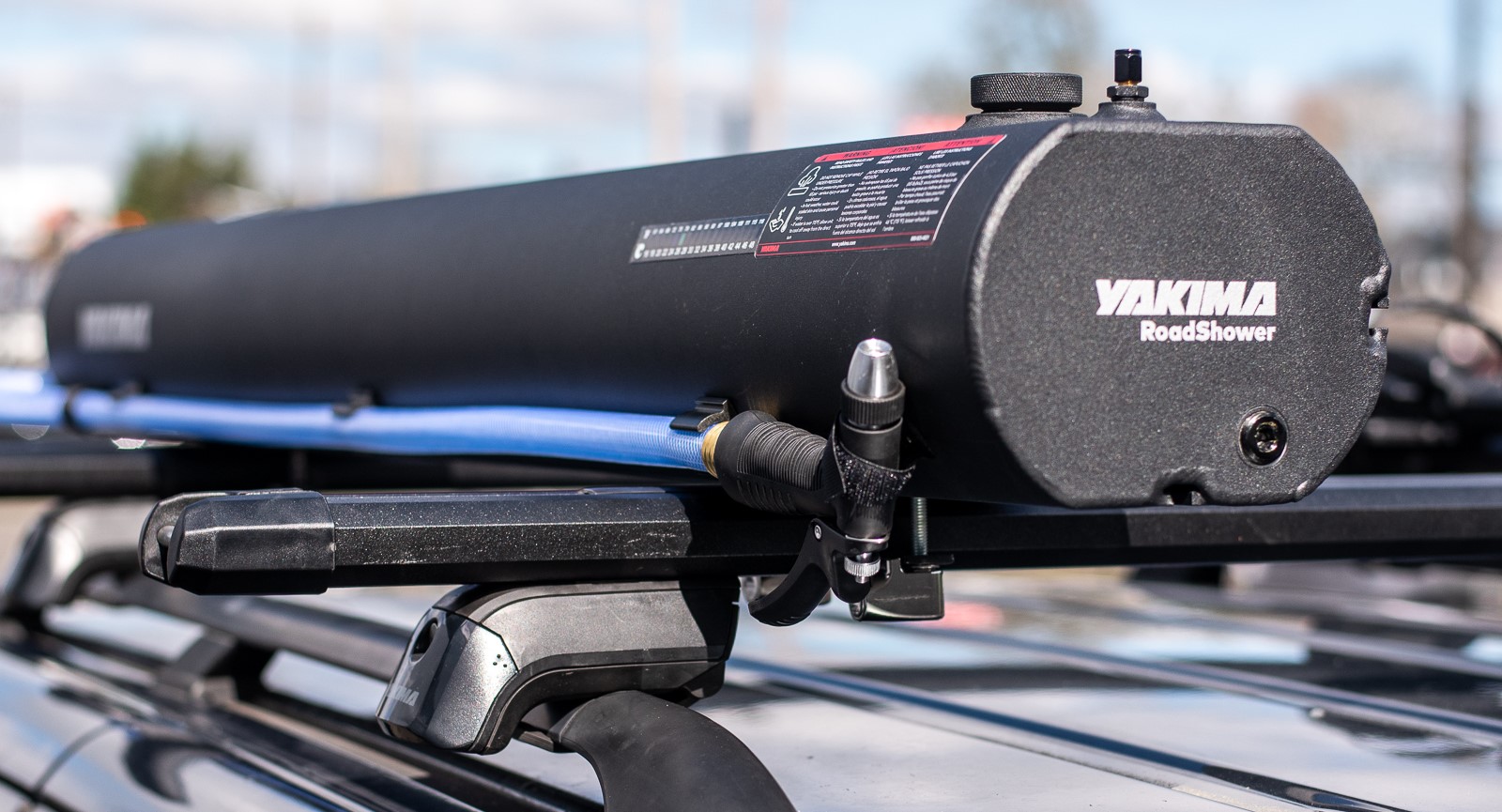 On top of the tank you’ll find the schrader valve, which is used to check pressure and pressurize the tank, and the fill cap, which is used to fill the tank and includes a pressure relief valve. It comes with a thermometer you can stick anywhere you like. The older models had tabs welded to the front and rear of the tank to use your own locking cable, but mine must be a newer revision that does not have these tabs. There is a combination of straps and clips on the side to secure the hose. There are threaded holes on both ends of the tank that allow you to install the elbow on either side, or use an additional elbow to have an outlet on both ends. A quick-connect is installed on the elbow to make it easier to take the hose on and off. 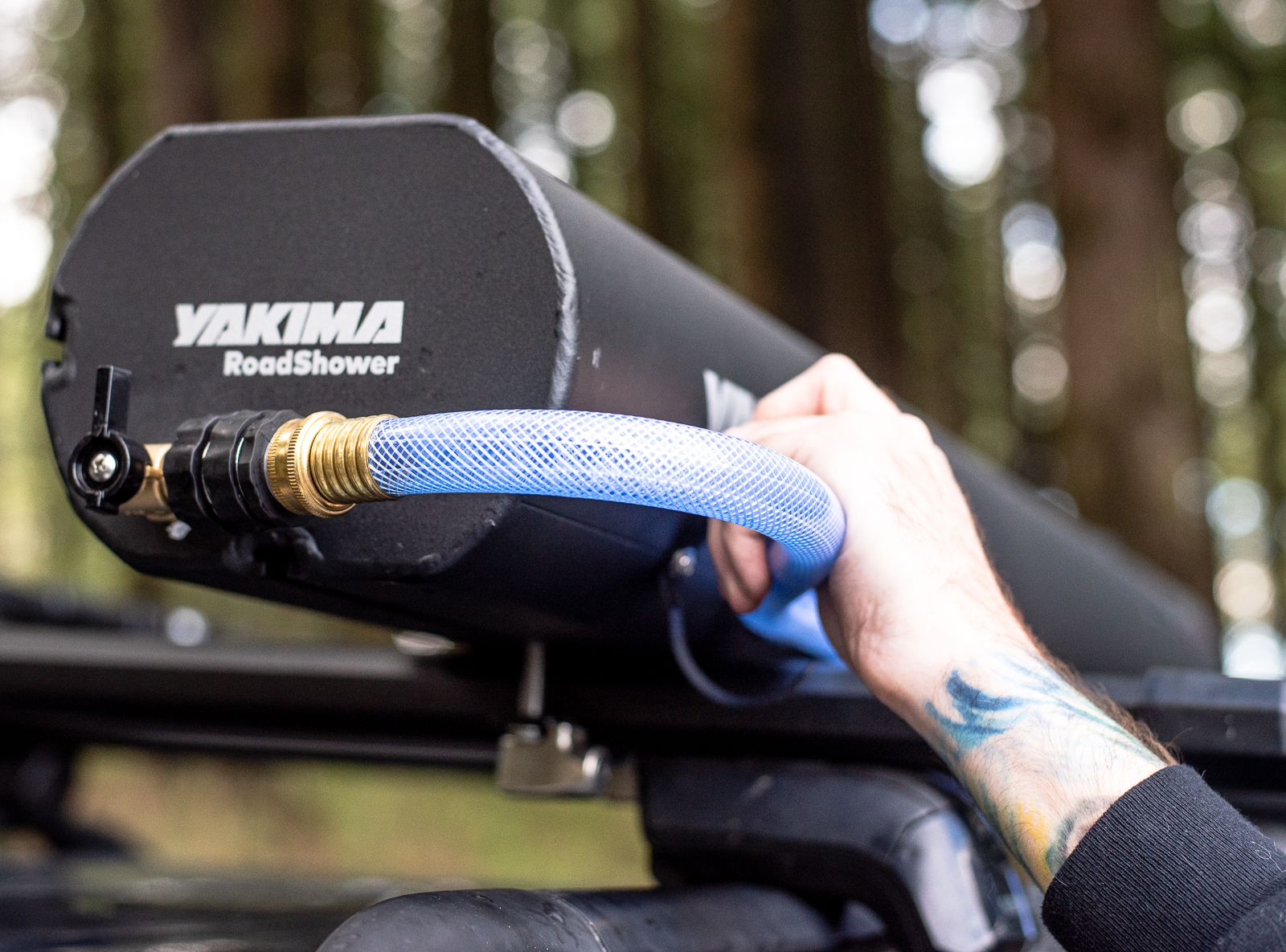 The hose that it comes with is nice, but on the short side. The length corresponds with the length of the tank, which makes sense and means you get a longer hose with the 10 gallon model, but I don’t keep it up there anyway for fear of it walking away on its own. The nozzle is only ok. I often use my own hose and nozzle that I quick-connect/disconnect as needed and keep in the back of the car. The extra length makes the RoadShower more versatile.

There are 2 main ways to fill the RoadShower: in a closed system building pressure as you go, or through the cap at the top which requires separate pressurization. I wanted to run a bunch of tests to optimize filling and pressure, but I found that it really isn’t that important and doesn’t make enough of a difference to worry about. 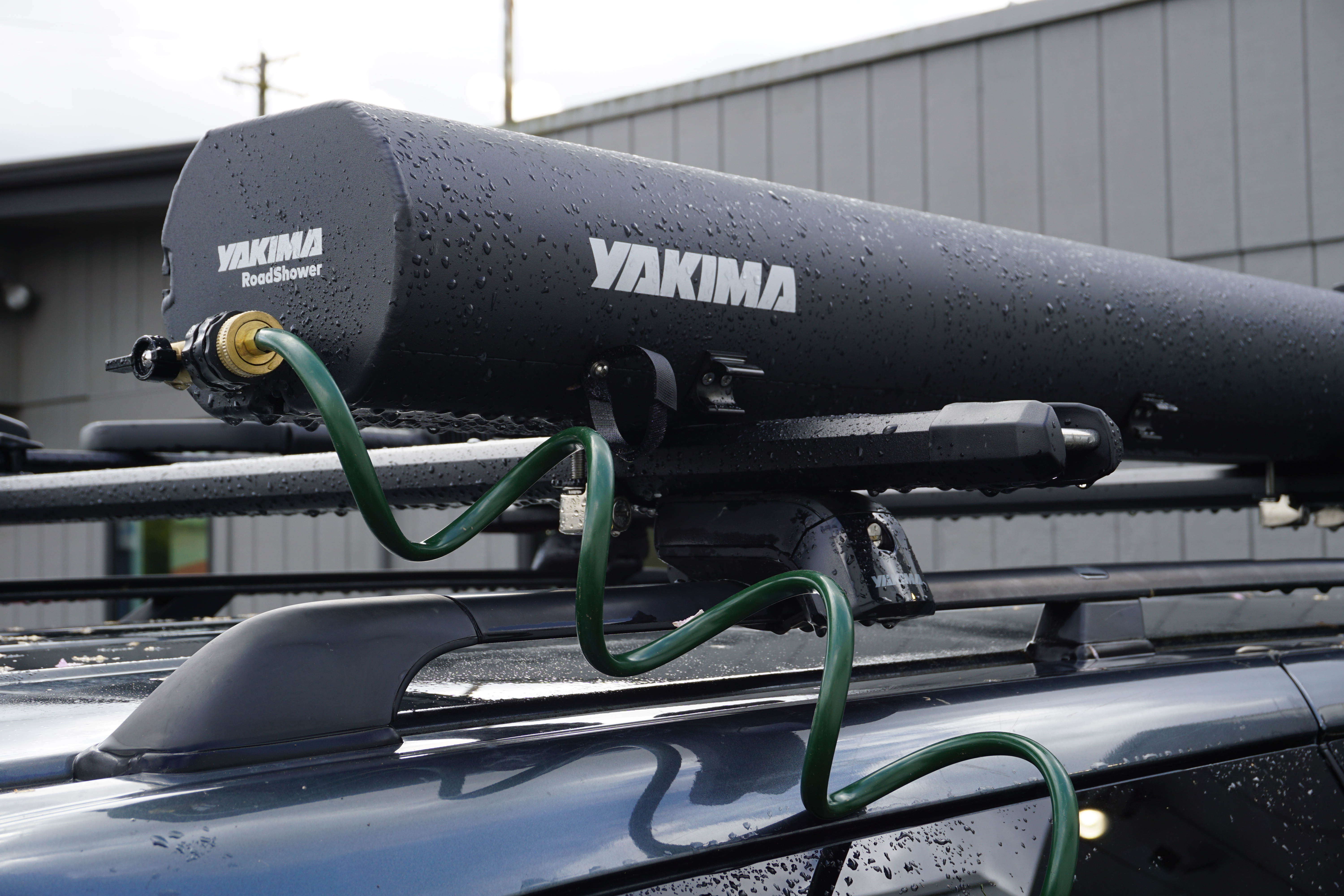 For me, it’s much easier to fill in a closed system and let my water source apply the pressure. I run a hose from the spigot to the elbow. The pressure relief valve in the fill cap starts spewing air and water around 55psi, but Yakima recommends checking pressure with the schrader valve as you go just in case the release valve fails. Depending on your water source, the pressure may equalize and water will stop flowing before the pressure relief valve opens. It takes just a few minutes to fill and pressurize, and provides a few gallons and a few minutes worth of pressurized water before it needs to be repressurized. Remember to close the elbow before disconnecting the hose from the spigot.

If you fill the tank through the fill cap at the top, have a weak water source, or if you need to top off pressure at some point, you’ll need to pressurize the tank manually. You can use a bike pump, but a small air compressor/inflator that plugs into your car’s DC outlet makes this much easier (and isn’t a bad idea to keep in the car anyway). The one I’ve been using costs less than $50 and pressurizes the tank in a couple minutes depending on how full it is. 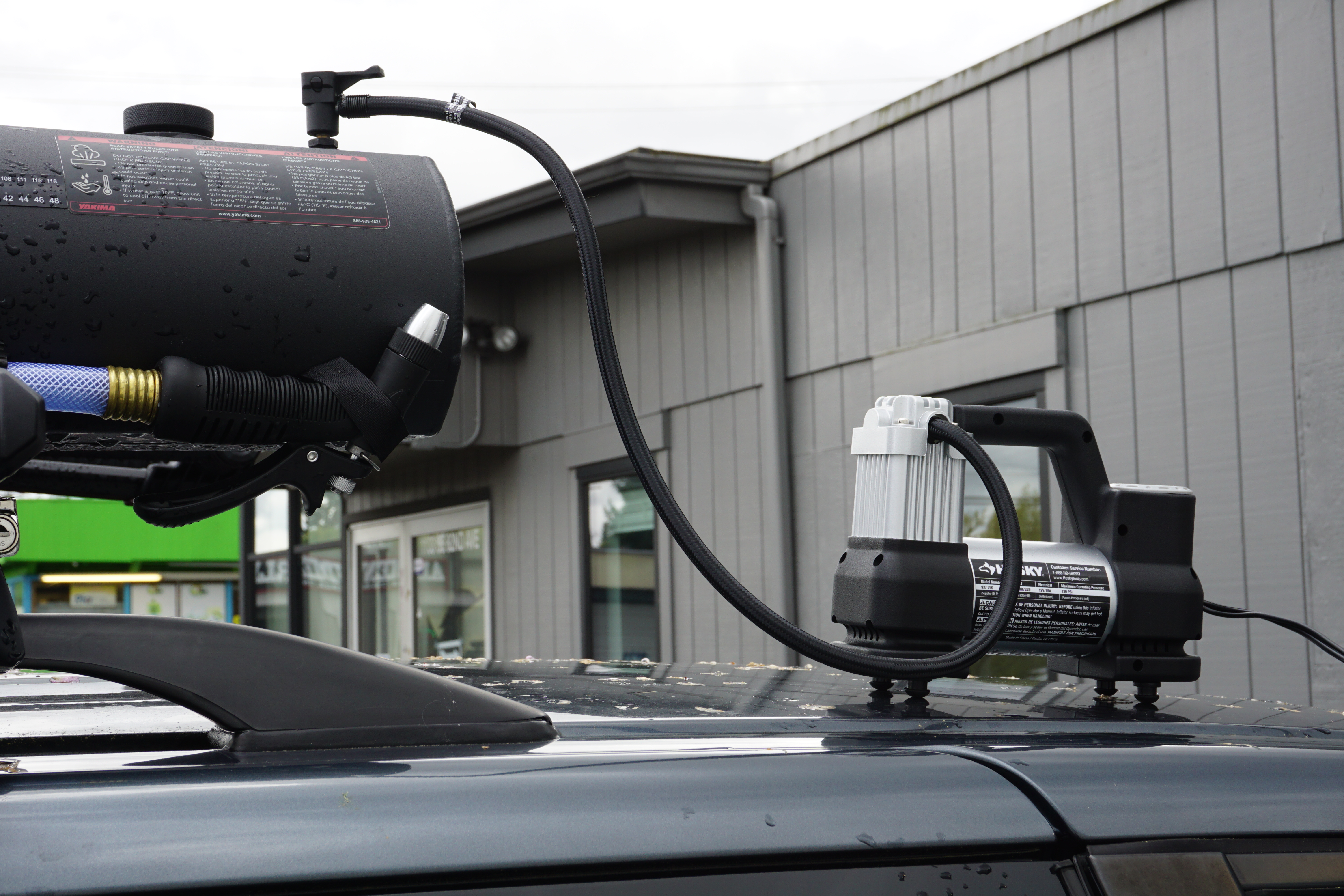 Now for the important part: what do I use this thing for? Since the shower attachment is a separate accessory and it just comes with the hose and spray nozzle in the box, calling it a RoadShower feels a little presumptuous.

The most enticing use for me would be to carry along a healthy supply of potable drinking water for dispersed camping. However, Yakima says not to drink from the RoadShower. I’m not here to tell anyone what they should or shouldn’t drink, but I won’t be talking about drinking from the RoadShower here. Water filtration attachments are available for garden hoses and RV's, but I’m not qualified to make any recommendations regarding water safety (those reading in California probably have some sort of disclaimer you’re supposed to be presented with right now). 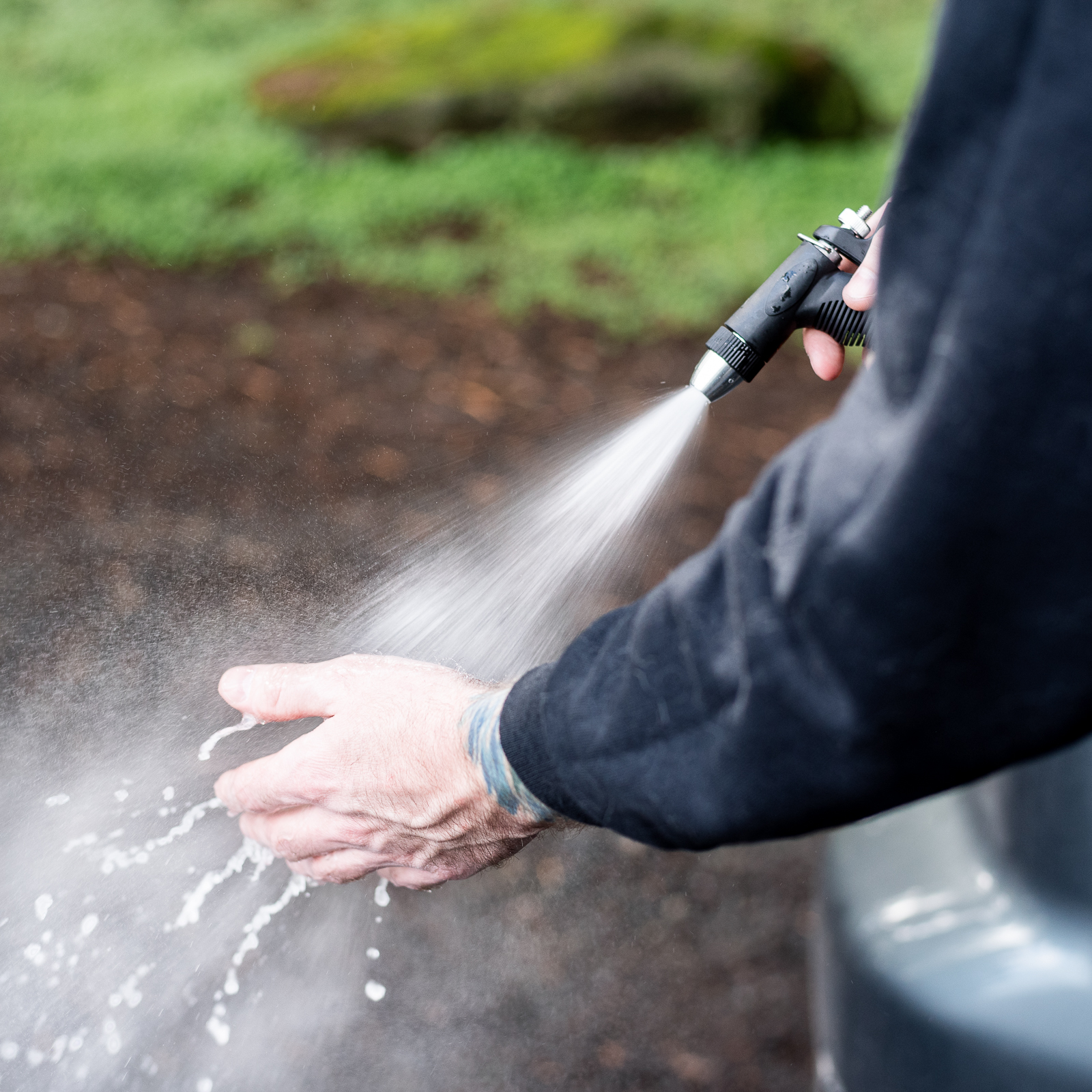 Instead, the RoadShower supplies a steady source of dishwater and is useful for hosing down other things as well. I can clean mud and plants and other debris from my mountain bike at the source instead of tracking it anywhere. It’s also great to be able to do this with kayaks. The longer hose allows me to mount the kayaks on the roof and hose them down before even leaving the lake. The drive dries them off, and then when I get home I can just put them away without worrying about additional chores. 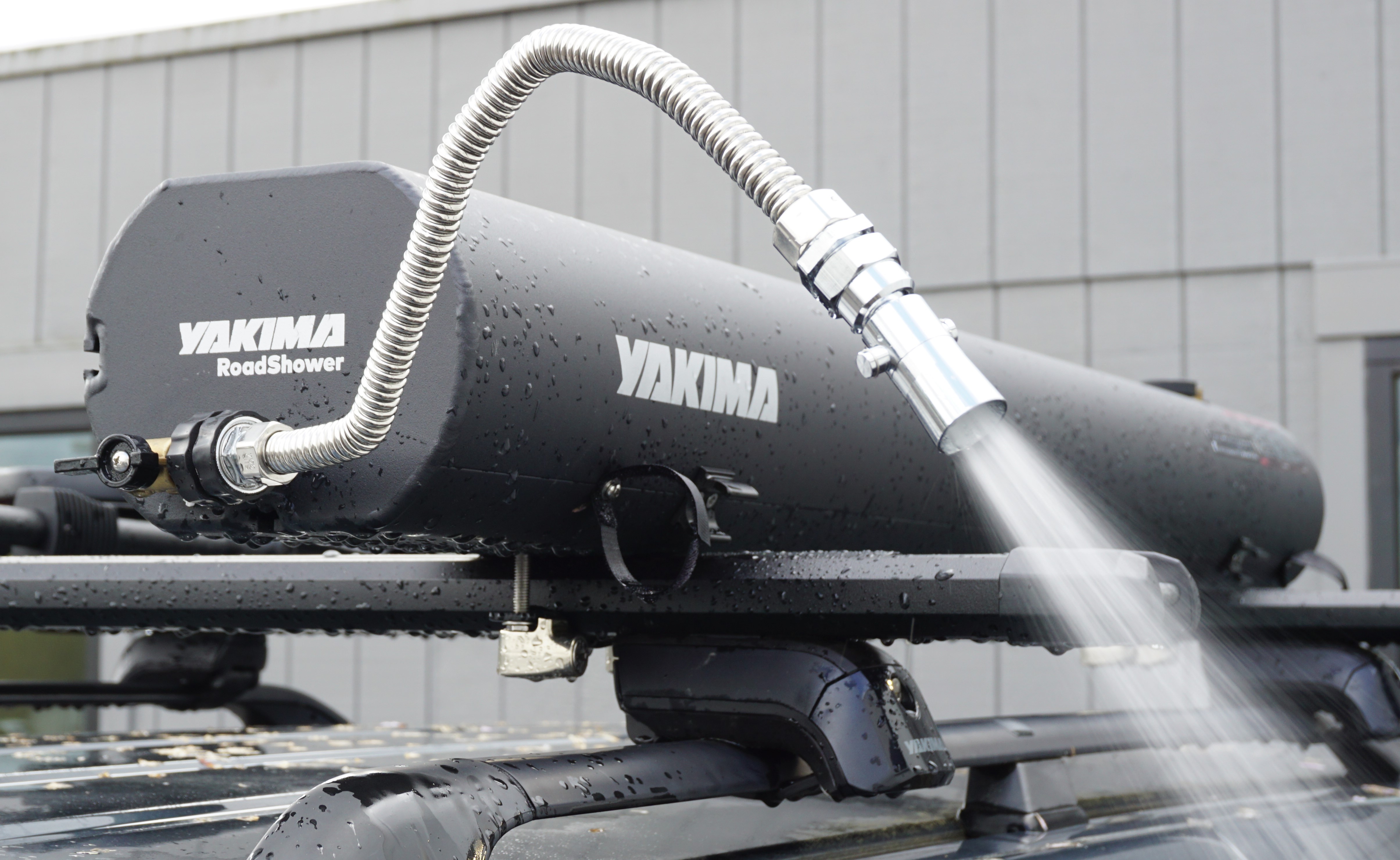 If you buy the extra shower attachment, you can use the RoadShower as its name implies. There is an option for a 19” hose and a 30” hose. They attach with the quick connect hardware so they’re easy to take on and off as needed.

Shower runtime is about 4-5 minutes of reasonable pressure, without repressurizing the tank. You should get at least a few showers out of the tank, especially if you top off pressure between hose-offs. 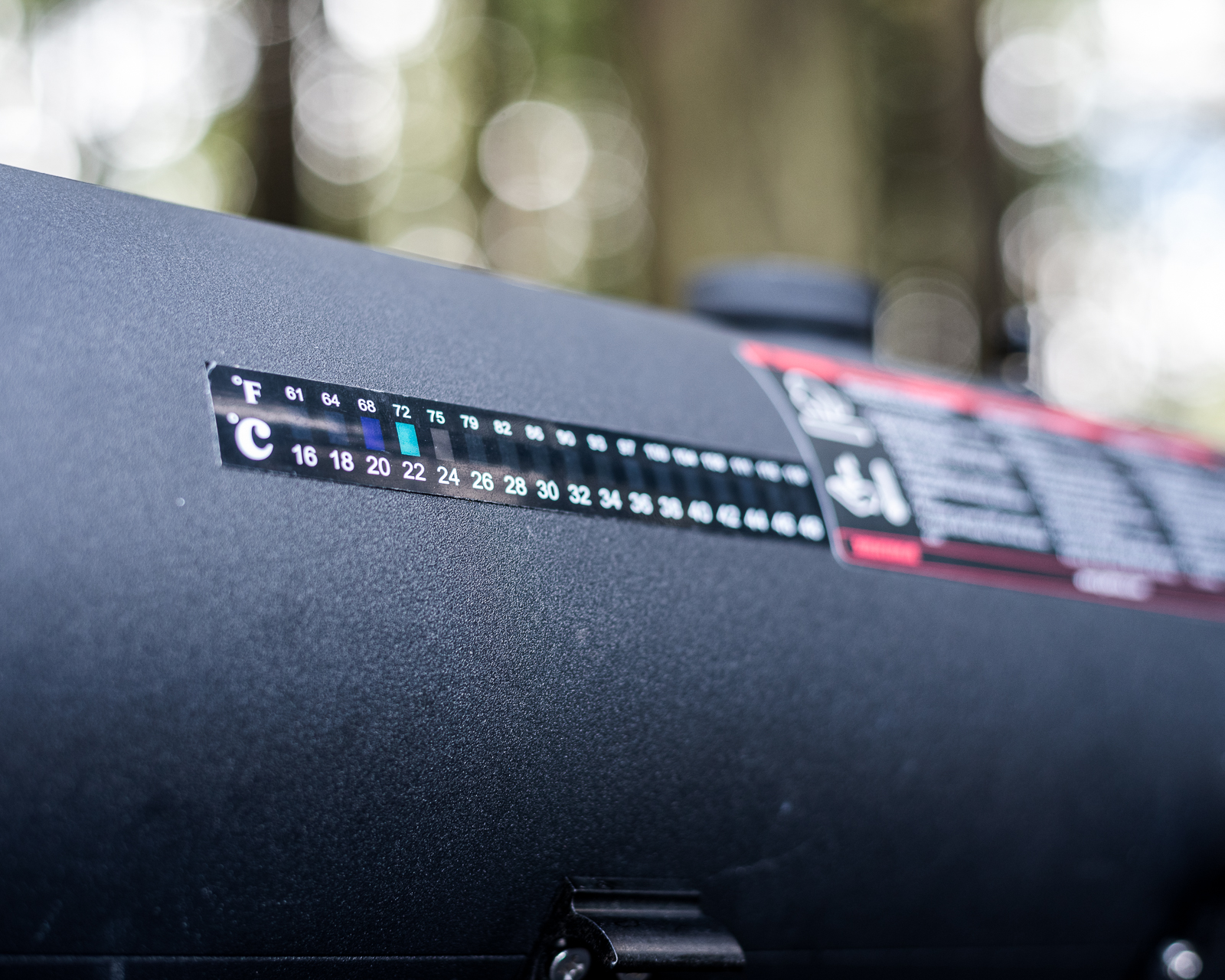 As long as there is sun, the tank really does raise the temperature of the water fairly quickly. There are too many variables to make truly accurate predictions, but Yakima’s estimation of “approximately 10-15 degrees per hour” is certainly feasible if there is enough sun. The water can be substantially warmer than the ambient air temperature.

All in all, I find the RoadShower useful. I wish it cost less and had nicer mounting hardware, but if you need to haul extra water and want to keep it out of the way, the RoadShower is the way to do it.