Free Shipping for orders over $99
*some exclusions apply.
Shopping in Portland or Seattle/Renton? Click to Book an Appointment!
Home / ReRack Blog / The Case for Top of Car Bike Racks

The Case for Top of Car Bike Racks

I’m lazy. If the list of tasks involved to do the fun thing I have in mind is too long, there’s a pretty good chance I’m going to spend the afternoon watching Netflix. This is especially true with biking. Sure, I could leave on my bike right out my front door and have a good enough time. But I live in Portland, and most bike rides in Portland start with putting my bike on the car and driving to the place I actually want to ride. This means dealing with bike racks, and I much prefer to use bike racks that don’t add an additional task to the list of things keeping me from the trailhead. 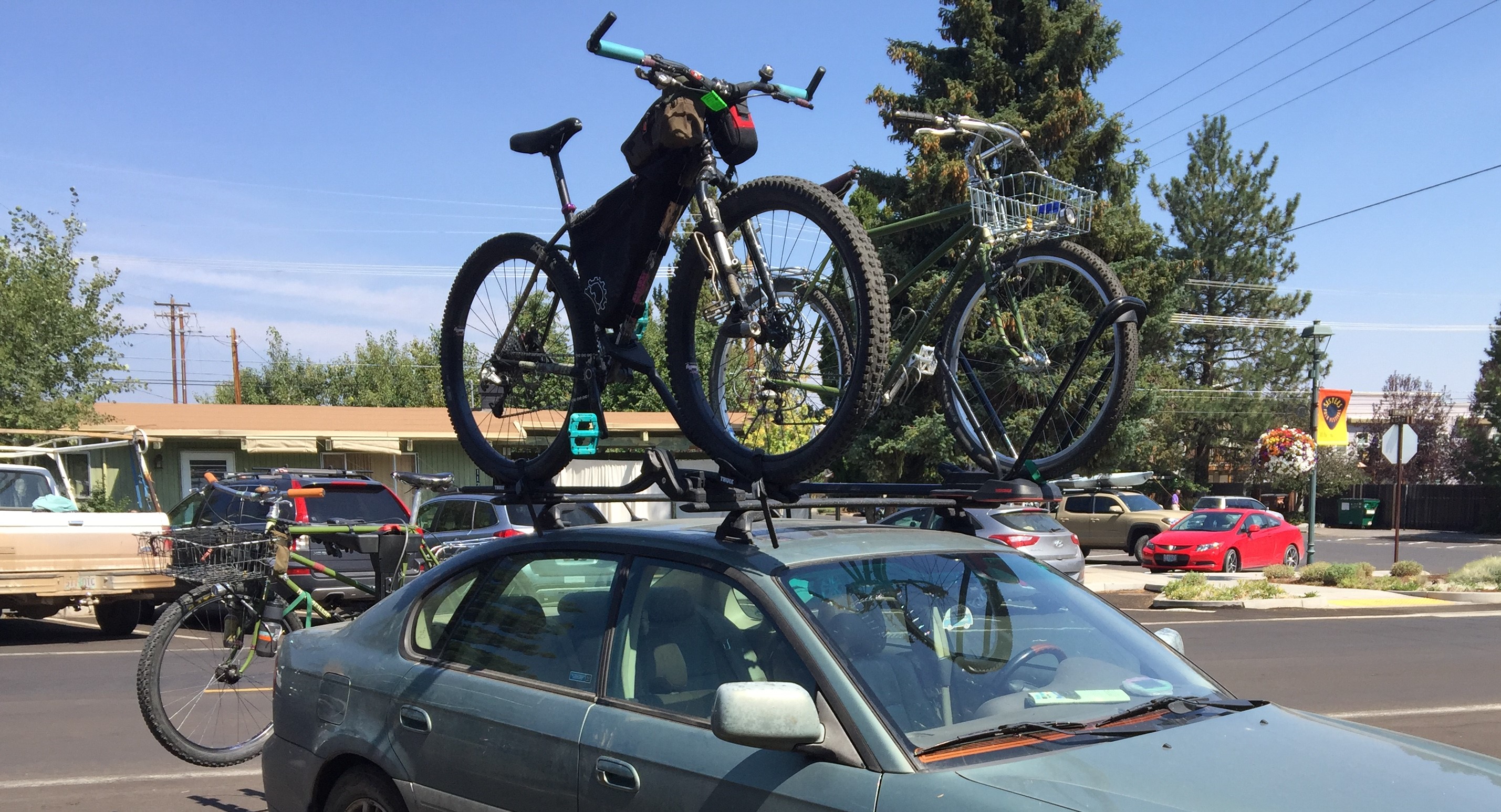 I’ve had the opportunity to try a lot of different bike racks. I started with a basic Thule Gateway trunk rack, then got a hitch rack, and then various top of car racks. Once you get a hitch or a roof rack, trunk racks pretty quickly become way more trouble than they’re worth. Hitch bike racks have some pretty appealing features, but I always end up with roof bike racks living on my vehicle. 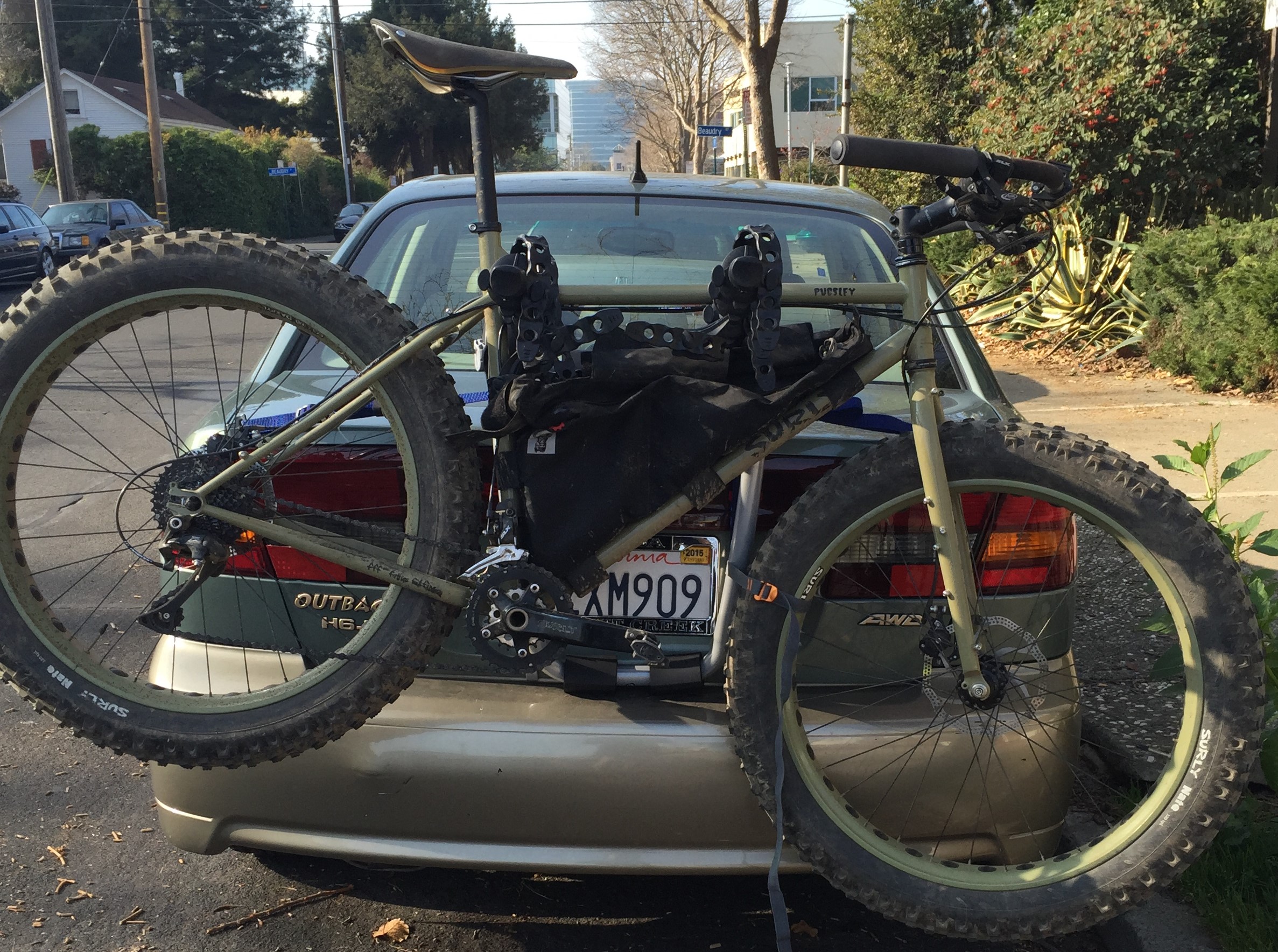 Without a doubt, it’s much easier to lift a bicycle onto a hitch rack than a roof rack. There’s also no “perfect” rack as far as I’m concerned. They all have pluses and minuses as far as usability and perhaps more importantly, compatibility. My bikes tend to have fenders, big luggage racks, huge tires, or any combination of these attributes. This pretty quickly rules out most platform style racks that hold the bike by the front wheel: the hoop can’t contact the front tire where it needs to. Bye bye T2, and thanks for the scuff marks on the fork of my Pugsley.

(Pay no mind to the extremely disapproved rack use in the following photo.) 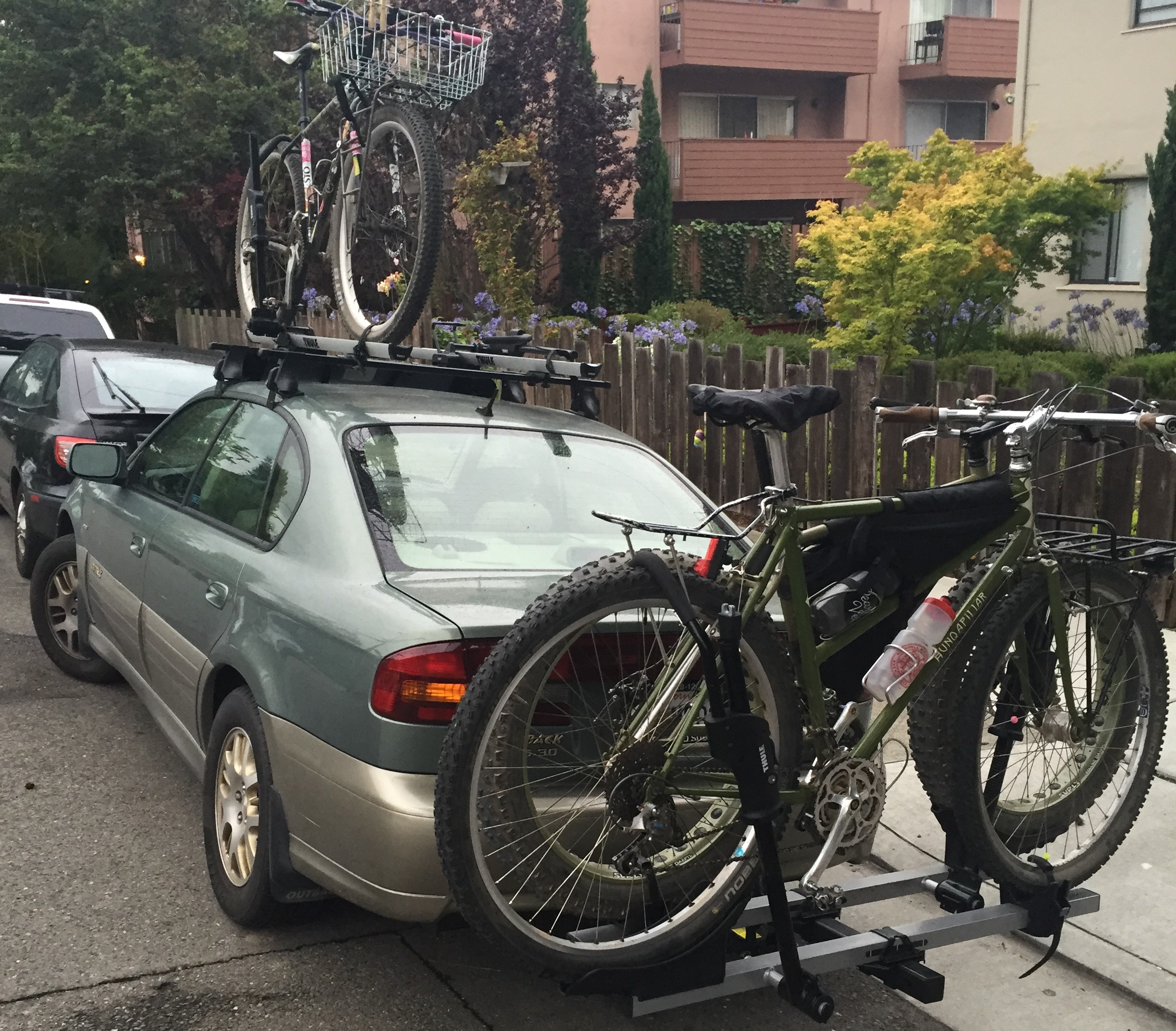 There are platform options that have a hook that comes down onto the frame, but almost all of these have ridiculously unnecessarily fiddly wheel trays that have to be adjusted anytime you don’t carry the exact same bike. My stint with the TwoTimer was short lived (but I am interested in trying the OnRamp). 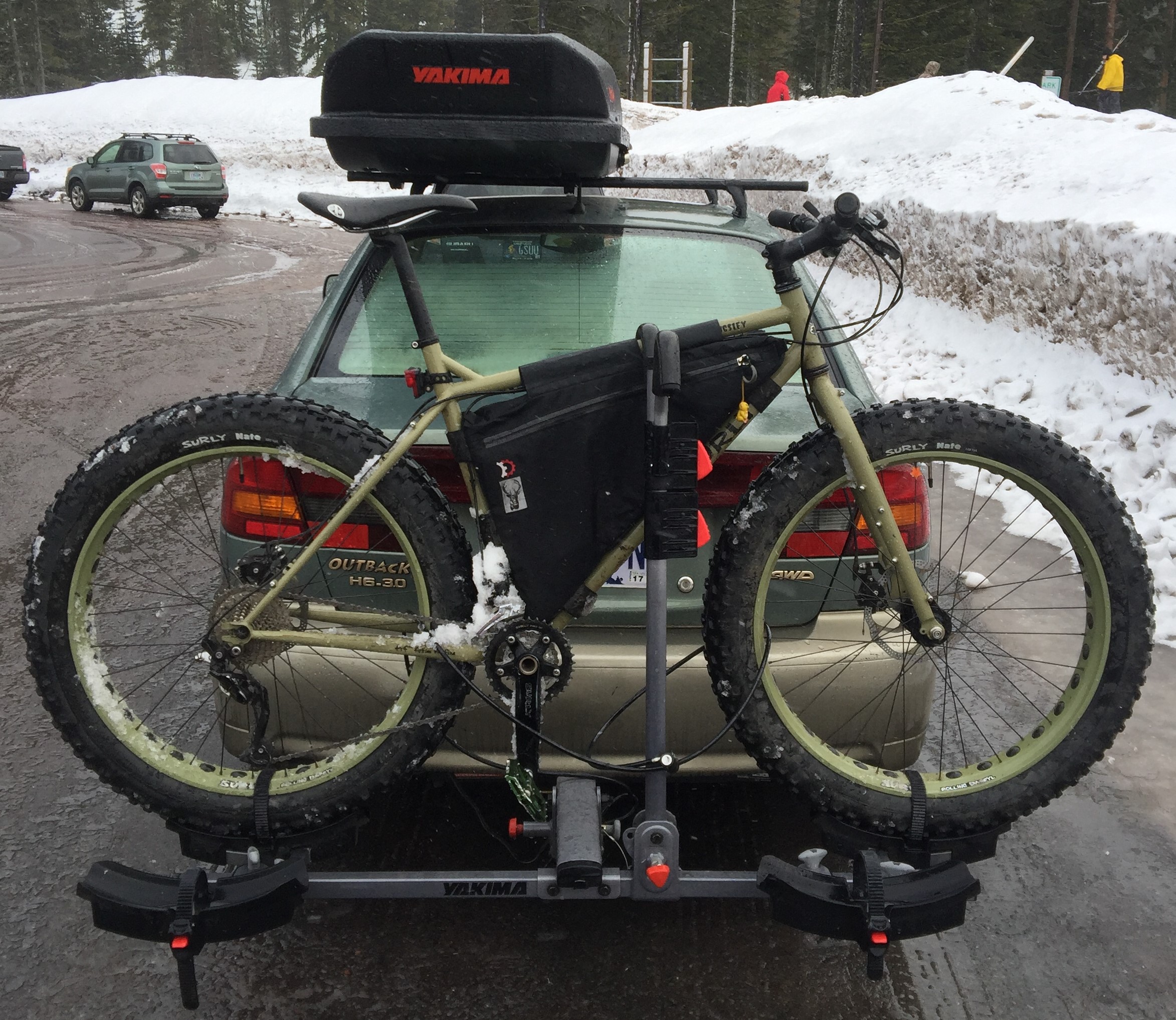 These problems can be solved to some extent with a classic hanging style rack. I started with a 2 bike Thule Vertex, and the hitch rack that lives in my garage now is a Yakima FullTilt 4. I don’t have bikes with rear suspension, drastically sloping top tubes, or kids bikes, so my bikes all fit these racks without top tube adapters. They don’t care about racks, fenders, or tire size, and they fit in the garage in a smaller footprint than platform racks. They’re far from perfect. ZipStrips are a huge improvement over the old rubber straps, but they can still be tricky to wedge between the frame and rear tire on the anti-sway cradle. I learned the hard way that the best way to keep pedals from marring the neighboring bike’s frame is to tether them together. There’s also no way I’m getting 4 bikes on a FullTilt 4. When I carry mine and my buddy’s bikes at the same time on it, I often put one bike in the closest position, and one bike in the furthest position. Otherwise racks, handlebars, and seatposts all fight for the same real estate. 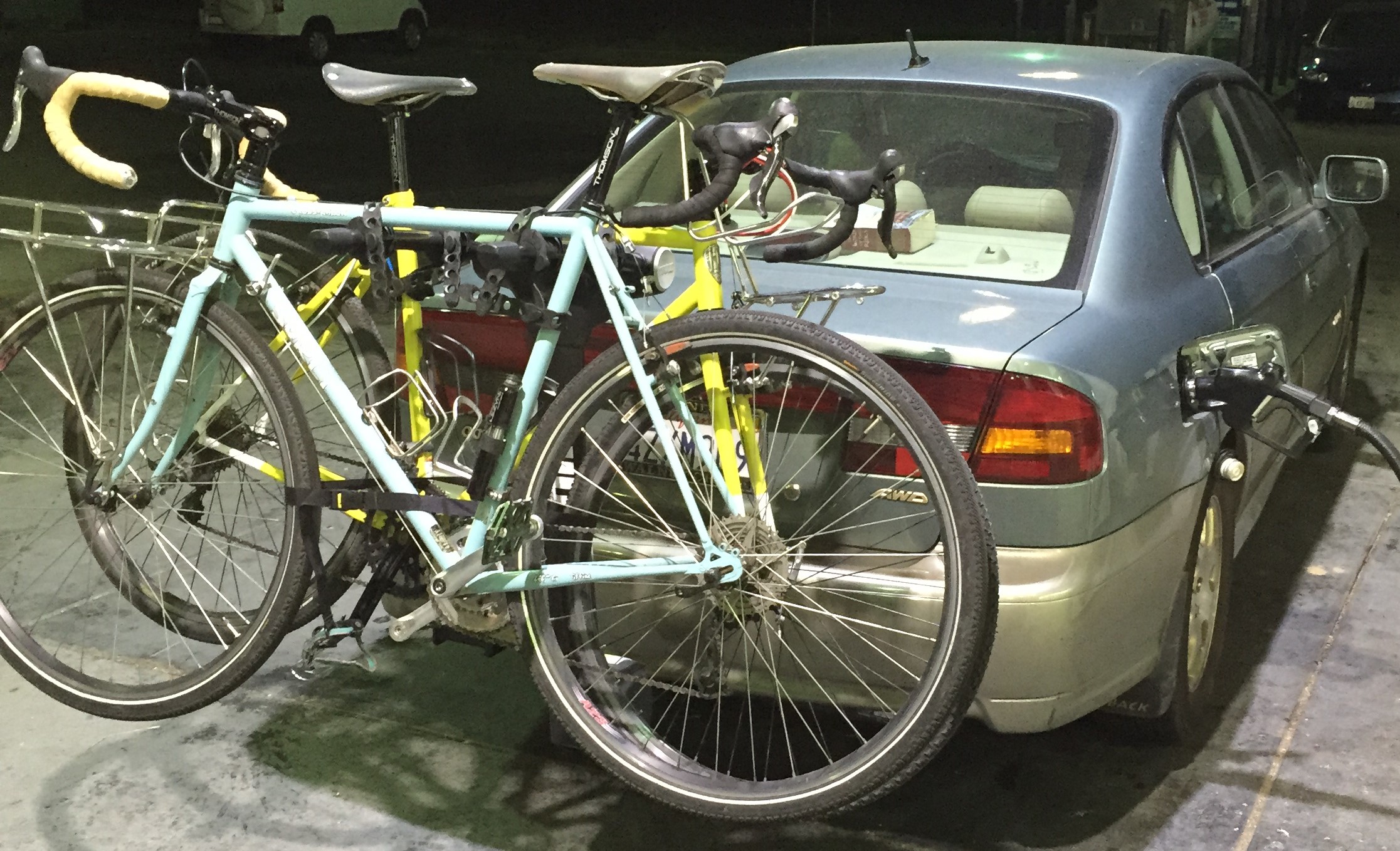 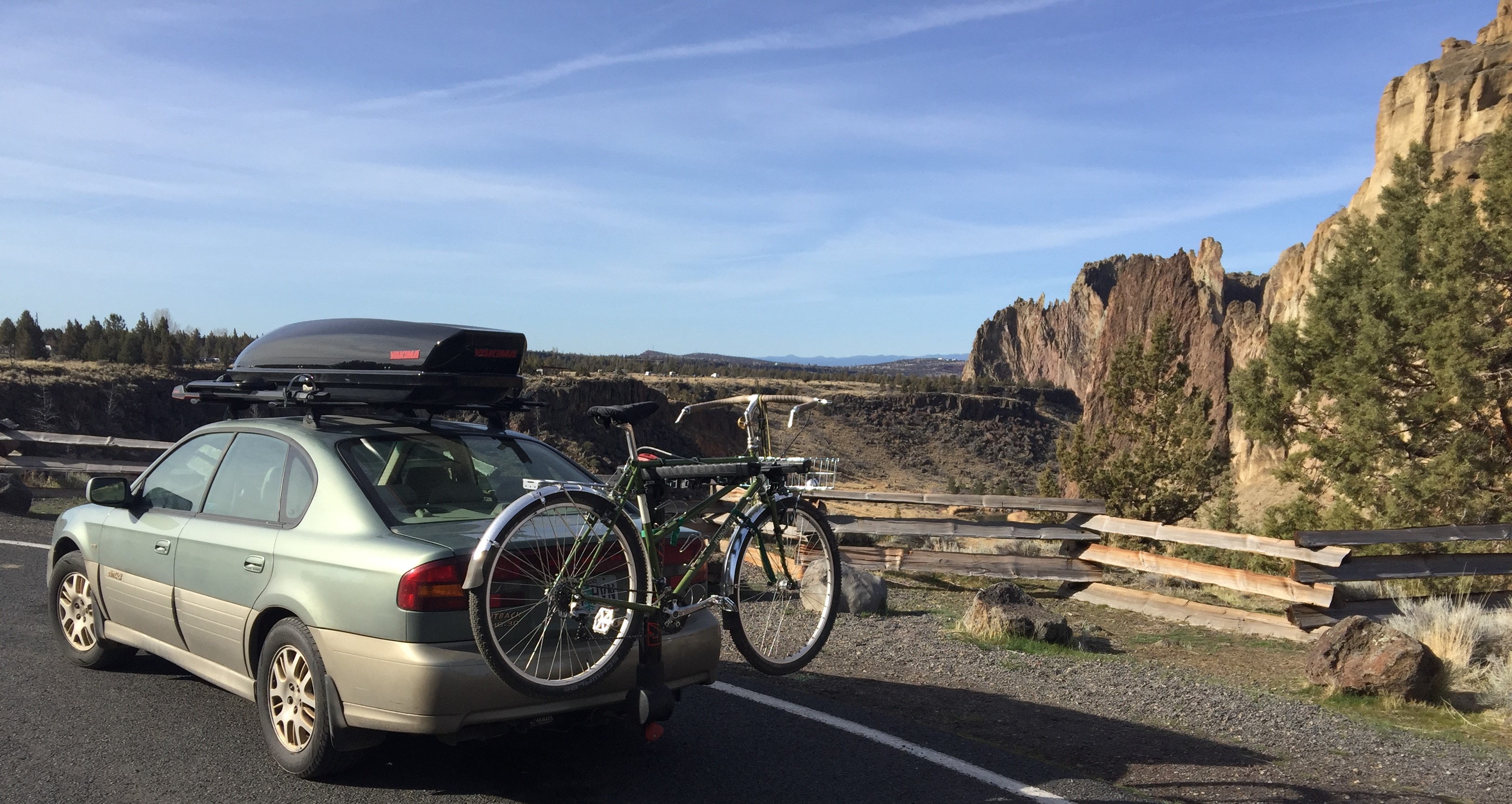 There are a couple really big problems I have with hitch racks. One is convenience. I’ve rarely had a driveway to park in, so my car is almost always street parked. I also drive around Portland and find myself parallel parking somewhere around Mississippi, Hawthorne, etc. Parallel parking with a hitch rack attached is no fun, so I tend to not leave a hitch rack attached to my car. This means if I want to use it, I have to pull it out of the garage and get it installed. I chose the FullTilt because the combination of AutoPin™ and locking SpeedKnob™ make this relatively painless, but it’s still an additional step. The worst, though, is taillight visibility. Even without bikes mounted, the wheel tray cups on the T2 and TwoTimer obscured the turn signals on my Subaru. Put a couple bikes on the rack, and turn signals and brake lights quickly become prohibitively obscured. This is a dealbreaker for me. Accessory tail lights are relatively cheap (Curt makes these stick-on ones that are great) and should be included for the price of the rack in my opinion.

The solution to almost all of these problems is roof bike racks. There are still compatibility issues, and some vehicles are just too tall to easily lift a bike onto. But they provide one very important thing: they are always on the car and ready to go. Unless you have a roof full of bikes, they also usually provide plenty of clearance between bikes, not typically provided by hitch racks which tend to be a game of Tetris to get them to fit together.

Luckily, I’ve had the opportunity to try dozens of bike racks. Thule Sidearms were quickly replaced due to the same issues with the T2 and other wheel hook style racks. Fork mounts are ok; I particularly liked using a pair of Yakima Boa’s (now ForkChop) because they were very out of the way and could handle almost any fender and rack combination. I also think of fork mounts as being the most sturdy if you’re carrying bikes while driving offroad, but I’d much rather not have to take a wheel off. Thru-axles can cause compatibility problems, but all my bikes have quick release forks (not quite “standard”, the Pugsley has a uniquely wide fork that doesn’t work with most fork mounts).

My absolute favorite roof bike rack is the Thule ProRide (the Criterium it replaced is really good too). Mine is before the XT version, but for my use with it attached to the bars via T-slot, it works the same. It holds the bike by the downtube, so racks and fenders don’t cause problems. The FatBike Adapters don’t work well if you want the rack to be on the driver’s side, but the stock wheel holders allow the rack to be flipped around and work on either side of the vehicle and still have the bike face forward. I’m still waiting for Yakima to come out with a new version of the Raptor to compete with this rack, but so far, the ProRide is in a class all its own. If I had carbon frames I might look elsewhere, but all of mine are steel. 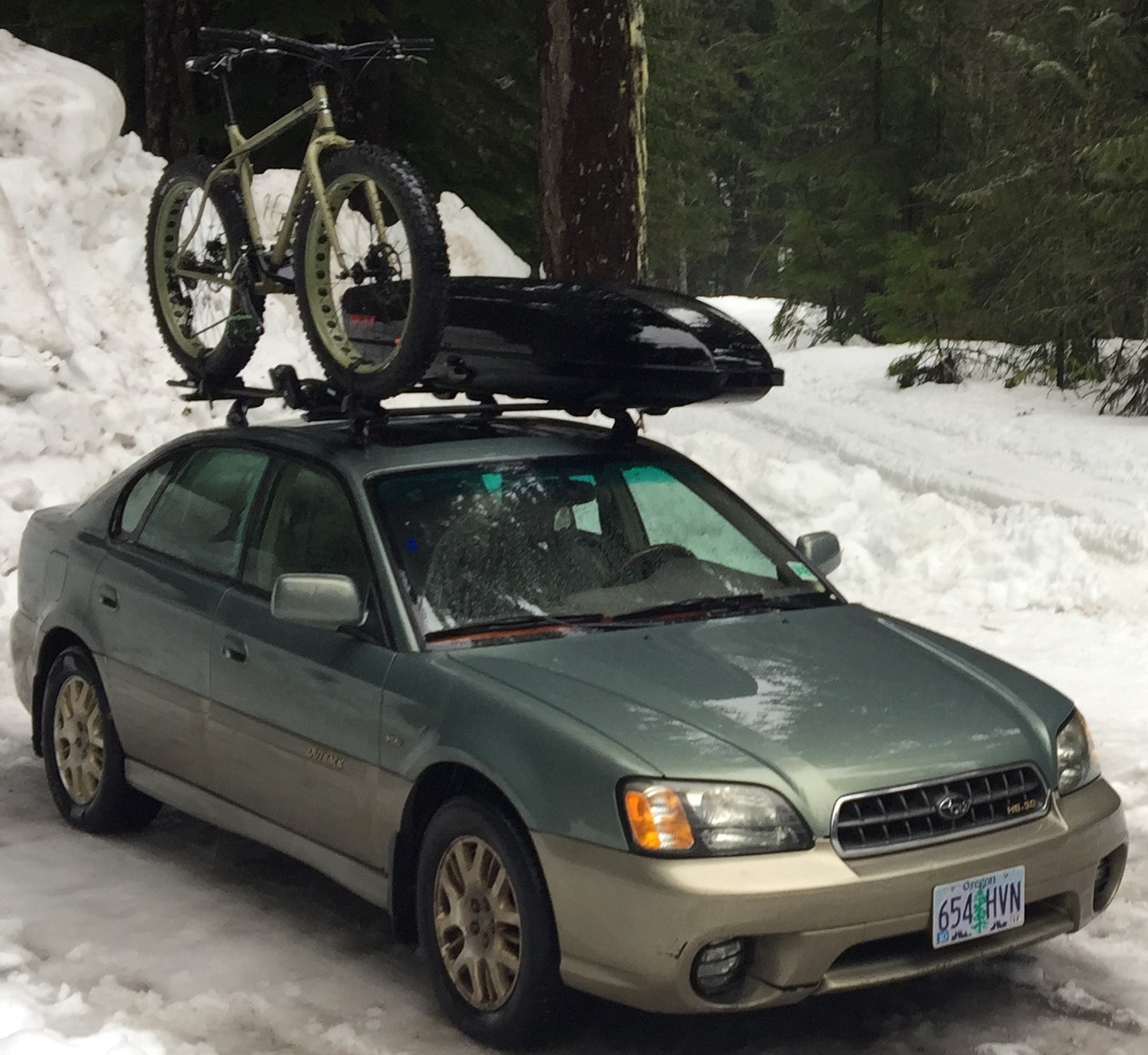 I also use a Yakima HighRoad and a Thule UpRide. These have about the same bike compatibility: they won’t work well with most fenders, but many platform and non-pannier style front racks will be fine. The UpRide can accept a broader range of wheel sizes (down to 20") as well as plus tires, but it feels like I don’t quite have enough hands to release all of the mechanisms to get the bike out. The HighRoad is very good. My biggest complaint with it is that it has a knob that needs to click to tell you the bike’s wheel has been torqued down enough. It rains a lot in Portland. Tightening this knob when it’s wet is not something I enjoy, and all Yakima has to do is reshape the knob to put a more positive grip on it, but they still haven’t done that. Even so, for bikes without fenders, it’s probably the quickest to get a bike into, and it fits plus and fat size tires, so I appreciate it for that. 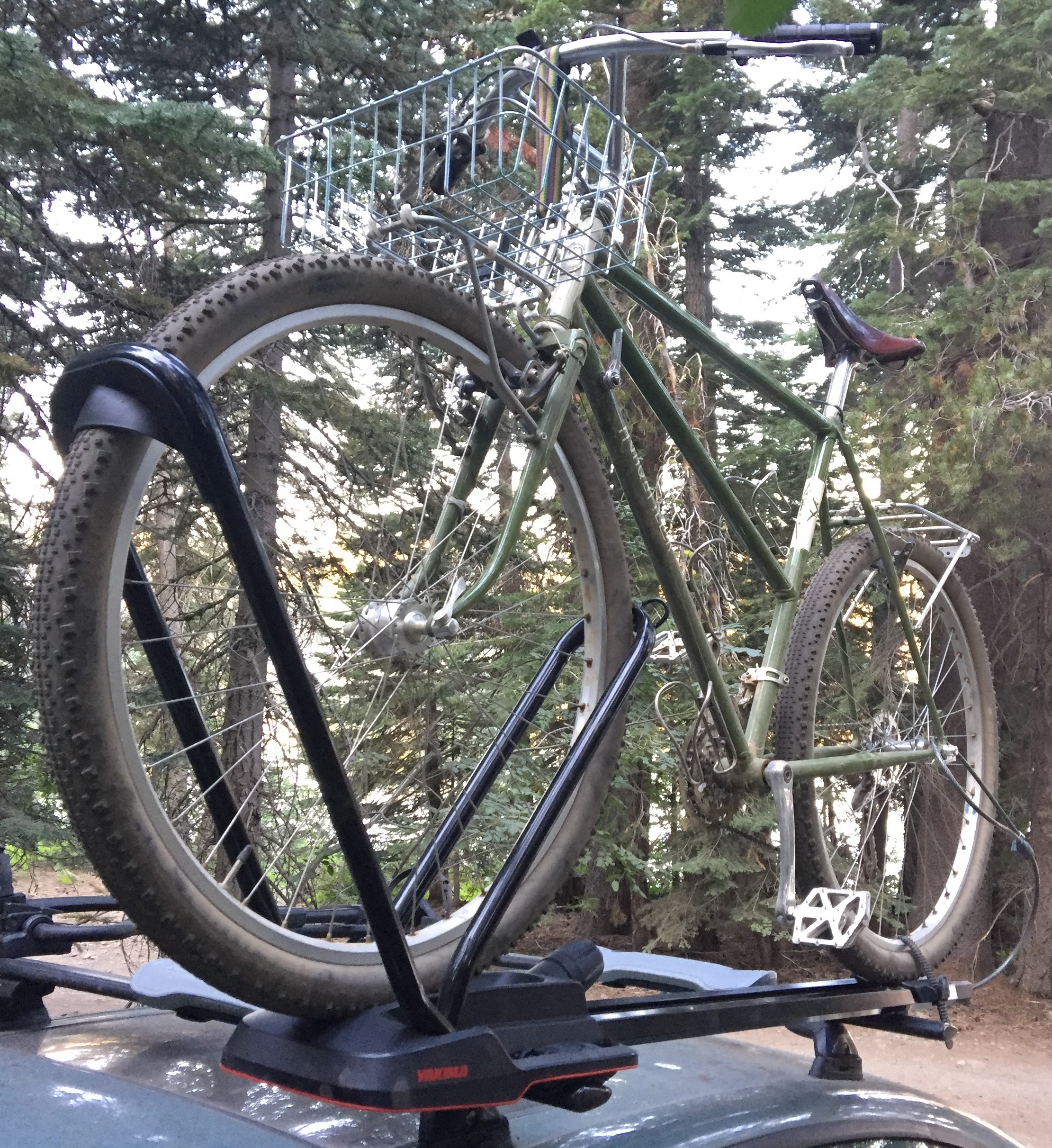 The biggest challenge with top of car bike racks is getting them up on the roof. I’m reasonably tall, but I cannot physically reach high enough to get my bikes up onto a minivan. My solution is a small step stool that lives in the car. This is still more convenient to me than a hitch rack that needs to be installed when I want to use it, since a suitable stool is small enough that it can be in the car all the time. Overhanging trees and things can also be a concern, but I don’t usually have a problem avoiding them. Handlebars often accumulate bugs, but the bikes don’t end up any dirtier than they would riding behind the car, getting subject to all kinds of road debris. 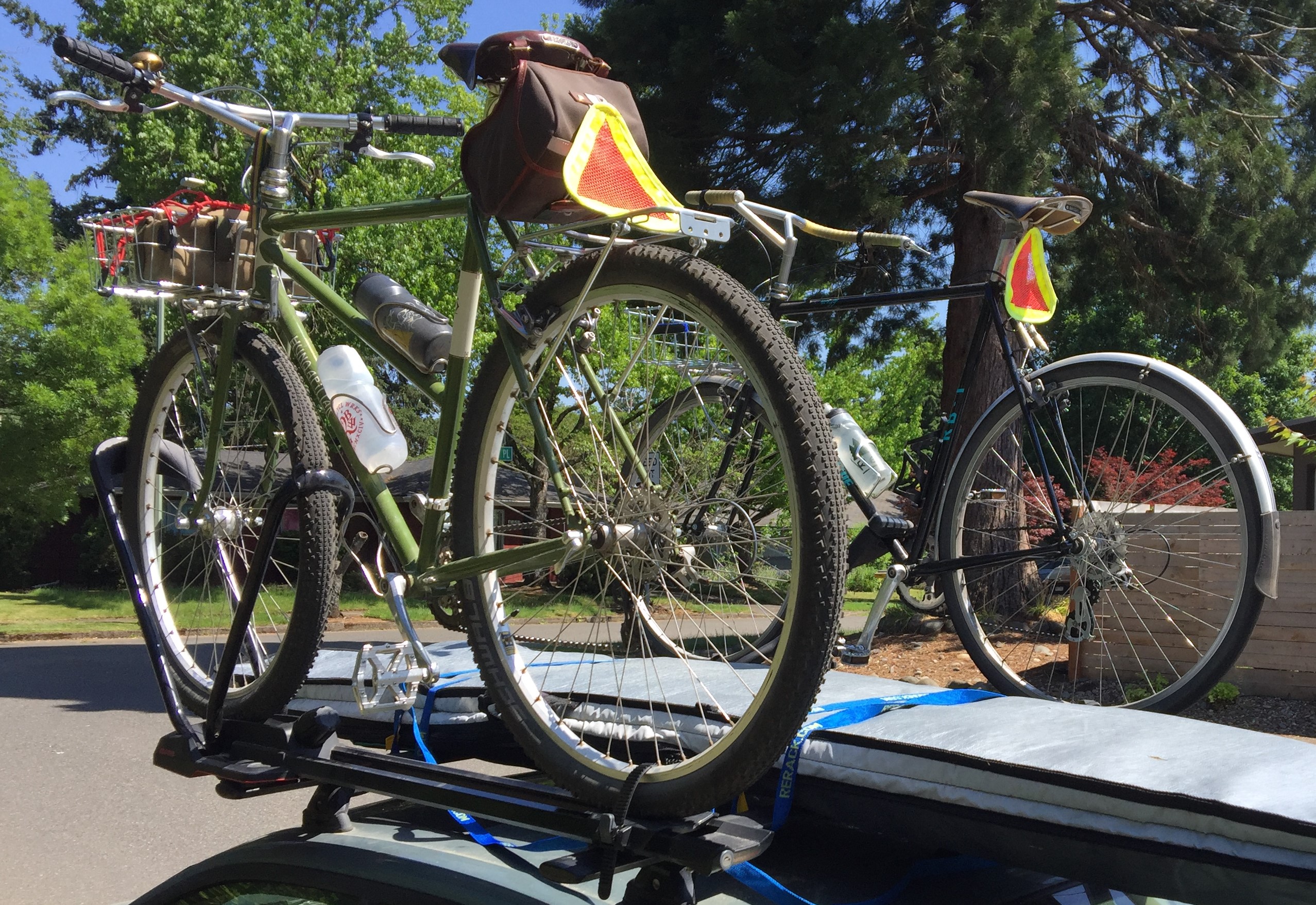 I won’t question that for many people, a hitch rack is the way to go. I’ve used them, and still have one, but my roof racks get used much more often. If I already had a hitch receiver but didn’t have a roof rack, I’d probably get a hitch rack and use it and not have an issue. For those out there starting from scratch, top of car bike racks are worth considering. You may even end up with both and become the designated driver any time your riding group takes a trip together. Hitch racks get a lot of hype, but don't pass up roof racks so quickly.